It is possible to model and monitor the energy and power usage of a gem5 simulation. This is done by using various stats already recorded by gem5 in a MathExprPowerModel; a way to model power usage through mathematical equations. This chapter of the tutorial details what the various components required for power modelling are and explains how to add them to an existing ARM simulation.

This chapter draws on the fs_power.py configuration script, provided in the configs/example/arm directory, and also provides instructions for how to extend this script or other scripts.

Note that power models can only be applied when using the more detailed “timing” CPUs.

An overview of how power modelling is built into gem5 and which other parts of the simulator they interact with can be found in Sascha Bischoff’s presentation from the 2017 ARM Research Summit.

Power Models consist of two functions which describe how to calculate the power consumption in different power states. The power states are (from src/sim/PowerState.py):

A Power Model is assigned to each of the states, apart from UNDEFINED, using the PowerModel class’s pm field. It is a list containing 4 Power Models, one for each state, in the following order:

A Power Model must contain an equation for modelling both of these (although that equation can be as simple as st = "0" if, for example, static power is not desired or irrelevant in that Power Model).

The provided Power Models in fs_power.py extend the MathExprPowerModel class. MathExprPowerModels are specified as strings containing mathematical expressions for how to calculate the power used by the system. They typically contain a mix of stats and automatic variables, e.g. temperature, for example:

(The above power model is taken from the provided fs_power.py file.)

We can see that the automatic variables (voltage and temp) do not require a path, whereas component-specific stats (the CPU’s Instructions Per Cycle ipc) do. Further down in the file, in the main function, we can see that the CPU object has a path() function which returns the component’s “path” in the system, e.g. system.bigCluster.cpus0. The path function is provided by SimObject and so can be used by any object in the system which extends this, for example the l2 cache object uses it a couple of lines further down from where the CPU object uses it.

(Note the division of dcache.overall_misses by sim_seconds to convert to Watts. This is a power model, i.e. energy over time, and not an energy model. It is good to be cautious when using these terms as they are often used interchangeably, but mean very specific things when it comes to power and energy simulation/modelling.)

The provided fs_power.py script extends the existing fs_bigLITTLE.py script by importing it and then modifying the values. As part of this, several loops are used to iterate through the descendants of the SimObjects to apply the Power Models to. So to extend an existing simulation to support power models, it can be helpful to define a helper function which does this:

The function above takes a SimObject, a Power Model, and optionally a class that the SimObject’s descendant have to instantiate in order for the PM to be applied. If no class is specified, the PM is applied to all the descendants.

Whether you decide to use the helper function or not, you now need to define some Power Models. This can be done by following the pattern seen in fs_power.py:

The stat names are usually the same as can be seen in the stats.txt file produced in the m5out directory after a simulation. However, there are some exceptions:

By default, gem5 dumps simulation stats to the stats.txt file every simulated second. This can be controlled through the m5.stats.periodicStatDump function, which takes the desired frequency for dumping stats measured in simulated ticks, not seconds. Fortunately, m5.ticks provides a fromSeconds function for ease of usability.

Below is an example of how stat dumping frequency affects result resolution, taken from Sascha Bischoff’s presentation slide 16: 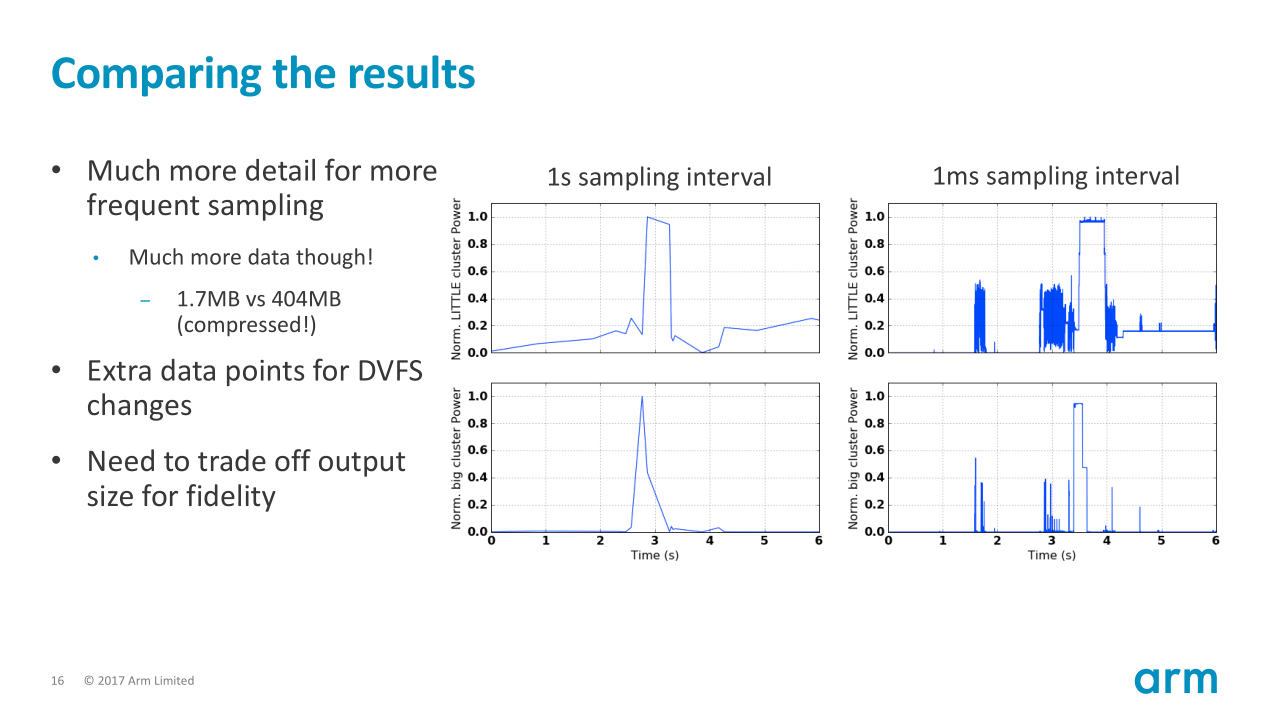 How frequently stats are dumped directly affects the resolution of the graphs that can be produced based on the stats.txt file. However, it also affects the size of the output file. Dumping stats every simulated second vs. every simulated millisecond increases the file size by a factor of several hundreds. Therefore, it makes sense to want to control the stat dump frequency.

Using the provided fs_power.py script, this can be done as follows:

The stat dump frequency could then be specified using

when invoking the simulation.

These are due to gem5’s stats framework recently having been refactored. Getting the latest version of the gem5 source code and re-building should fix the problem. If this is not desirable, the following two sets of patches are required:

These can be checked out and applied by following the download instructions at their respective links.