Different from gem5 SE mode (system emulation mode), the FS mode (full system mode) uses an actual Linux kernel binary instead of emulating the responsibilities of a typical modern OS such as managing page tables and taking care of system calls. As a result, gem5 FS simulation would be more realistic compared to gem5 SE simulation, especially when the interactions between the workload and the OS are significant part of the simulation.

Overall Structure of the Experiment 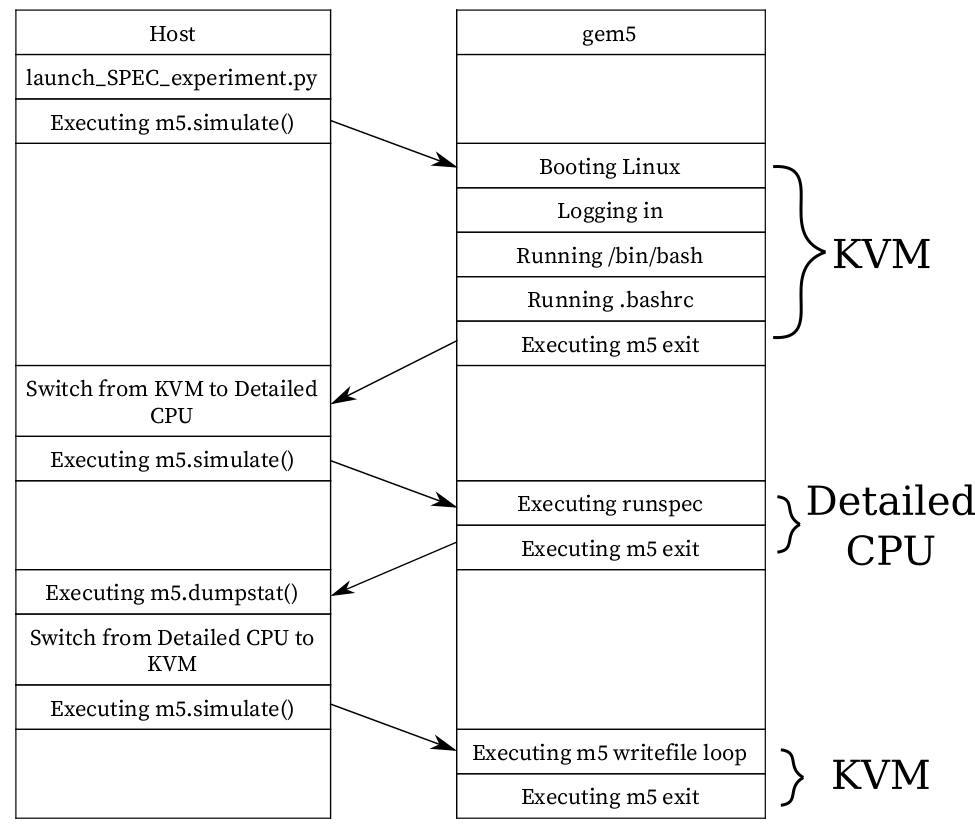 A visual depict of how gem5 interacts with the host system. gem5 is configured to do the following: booting the Linux kernel, running the benchmark, and copying the SPEC outputs to the host system. However, since we are interested in getting the stats only for the benchmark, we will configure gem5 to exit after the kernel is booted, and then we reset the stats before running the benchmark. We use KVM CPU model in gem5 for Linux booting process to quickly boot the system, and after the process is complete, we switch to the desired detailed CPU to run the benchmark. Similarly, after the benchmark is complete, gem5 exits to host, which allows us to get the stats at that point. After that, optionally, we switch the CPU back to KVM, which allows us to quickly write the SPEC output files to the host.

Note: gem5 will output the stats again when the gem5 run is complete. Therefore, we will see two sets of stats in one file in stats.txt. The stats of the benchmark is the the first part of stats.txt, while the second part of the file contains the stats of the benchmark AND the process of writing output files back to the host. We are only interested in the first part of stats.txt.

Setting up the Experiment

In this part, we have two concurrent tasks: setting up the resources and documenting the process using gem5art. We will structure the SPEC 2017 resources as laid out by gem5-resources. The script launch_spec2017_experiment.py will contain the documentation about the artifacts we create and will also serve as Python script that launches the experiment.

Acquiring gem5-resources and Setting up the Experiment Folder

Since all resources related to the SPEC CPU 2006 benchmark suite are in the src/spec-2017 and other folders in src/ are not related to this experiment, we set the root folder of the experiment in the src/spec-2017 folder of the cloned repo. To keep track of changes that are specific to src/spec-2017, we set up a git structure for the folder. Also, the git remote pointing to origin should also be setup as gem5art will use origin information. In the gem5-resources folder,

We document the root folder of the experiment in launch_spec2017_experiment.py as follows,

In the script above, we ignore files and folders that we use other gem5art Artifact objects to keep track of them, or the presence of those files and folders do not affect the experiment’s results. For example, disk-image/packer is the path to the packer binary which generates the disk image, and newer versions packer probably won’t affect the content of the disk image. Another example is that we use another gem5art Artifact object to keep track of vmlinux-4.19.83, so we put the name of the file in the .gitignore file.

Essentially, we tend to keep small-size files (such as scripts and texts) in a git structure, and to keep large-size files (such as gem5 binaries and disk images) in Artifact’s of type gem5 binary or binary. Another important difference is that gem5art does not keep track of files in a git Artifact, while it does upload other types of Artifact to its database.

In this step, we download the source code and build gem5 v20.1.0.4. In the root folder of the experiment,

We have two artifacts: one is the gem5 source code (the gem5 git repo), and the gem5 binary (gem5.opt). In launch_spec2017_experiments.py, we document the step in Artifact objects as follows,

Note: it’s important to compile the m5 binary with -DM5_ADDR=0xFFFF0000 as is default in the SConscript. This address is used by the guest binary to communicate with the simulator. If you change the address in the guest binary, you also have to update the simulator to use the new address. Additionally, when running in KVM, it is required that you use the address form of guest<->simulator communication and not the pseudo instruction form (i.e., using -DM5_ADDR is required when compiling a guest binary for which you want to run in KVM mode on gem5).

To compile m5 binary, in the root folder of the experiment,

In launch_spec2017_experiments.py, we document the step in an Artifact object as follows,

First, we download the packer binary. The current version of packer as of December 2020 is 1.6.6.

In launch_spec2017_experiments.py, we document how we obtain the binary as follows,

To build the disk image, in the root folder of the experiment,

The process should take about than an hour to complete on a fairly recent machine with a cable internet speed. The disk image will be in disk-image/spec-2017/spec-2017-image/spec-2017.

Note: Packer will output a URL to a VNC server that could be connected to to inspect the building process.

Now, in launch_spec2017_experiments.py, we make an Artifact object of the disk image.

Obtaining a Compiled Linux Kernel that Works with gem5

The compiled Linux kernel binaries that is known to work with gem5 can be found here: https://www.gem5.org/documentation/general_docs/gem5_resources/.

The following command downloads the compiled Linux kernel of version 4.19.83. In the root folder of the experiment,

Now, in launch_spec2017_experiments.py, we make an Artifact object of the Linux kernel binary.

The gem5 system configurations can be found in the configs/ folder. The gem5 run script located in configs/run_spec.py, takes the following parameters:

We don’t use another Artifact object to document this file. The Artifact repository object of the root folder will keep track of the changes of the script.

Note: The first two parameters of the gem5 run script for full system simulation should always be the path to the linux binary and the path to the disk image, in that order

Setting up the Python virtual environment

gem5art code works with Python 3.5 or above.

The following script will set up a python3 virtual environment named gem5art-env. In the root folder of the experiment,

To activate the virtual environment, in the root folder of the experiment,

To install the gem5art dependency (this should be done when we are in the virtual environment),

To exit the virtual environment,

Note: the following steps should be done while using the Python virtual environment.

The following script will run the MongoDB database server in a docker container.

The -p 27017:27017 option maps the port 27017 in the container to port 27017 on the host. The -v /path/in/host:/data/db option mounts the /data/db folder in the docker container to the folder /path/in/host in the host. The path of the host folder should an absoblute path, and the database files created by MongoDB will be in that folder. The –name mongo-1 option specifies the name of the docker container. We can use this name to identify to the container. The -d option will let the container run in the background. mongo is the name of the offical mongo image.

This step is only necessary if you want to use Celery to manage processes. Inisde the path in the host specified above,

Now, we can put together the run script! In launch_spec2017_experiments.py, we import the required modules and classes at the beginning of the file,

And then, we put the launch function at the end of launch_spec2017_experiments.py,

The above launch function will run the all the available benchmarks with kvm, atomic, timing, and o3 cpus. For kvm, both test and ref sizes will be run, while for the rest, only benchmarks of size test will be run.

Note that the line 'results/{}/{}/{}'.format(cpu, size, benchmark), # relative_outdir specifies how the results folder is structured. The results folder should be carefully structured so that there does not exist two gem5 runs write to the same place.

Having celery and mongoDB servers running, we can start the experiment.

In the root folder of the experiment,

Note: The URI to a remote database server could be specified by specifying the environment variable GEM5ART_DB. For example, if the mongo database server is running at localhost123, the command to run the launch script would be,

Not all benchmarks are compiled in the above set up as of March 2020. The working status of SPEC 2017 workloads is available here: https://www.gem5.org/documentation/benchmark_status/gem5-20#spec-2017-tests.

disk-image/spec-2017/install-spec2017.sh: a Bash script that will be executed on the guest machine after Ubuntu Server is installed in the disk image; this script installs depedencies to compile and run SPEC workloads, mounts the SPEC ISO and installs the benchmark suite on the disk image, and creates a SPEC configuration from gcc42 template.

disk-image/spec-2017/post-installation.sh: a script that will be executed on the guest machine; this script copies the serial-getty@.service file to the systemd folder, copies m5 binary to /sbin, and appends the content of runscript.sh to the disk image’s .bashrc file, which will be executed after the booting process is done.

disk-image/spec-2017/runscript.sh: a script that will be copied to .bashrc on the disk image so that the commands in this script will be run immediately after the booting process.

disk-image/spec-2017/spec-2017.json: contains a configuration telling Packer how the disk image should be built.