Our configuration script is going to model a very simple system. We’ll have just one simple CPU core. This CPU core will be connected to a system-wide memory bus. And we’ll have a single DDR3 memory channel, also connected to the memory bus.

This script is completely user-defined. You can choose to use any valid Python code in the configuration scripts. This book provides on example of a style that relies heavily classes and inheritance in Python. As a gem5 user, it’s up to you how simple or complicated to make your configuration scripts.

There are a number of example configuration scripts that ship with gem5 in configs/examples. Most of these scripts are all-encompassing and allow users to specify almost all options on the command line. Instead of starting with these complex script, in this book we are going to start with the most simple script that can run gem5 and build from there. Hopefully, by the end of this section you’ll have a good idea of how simulation scripts work.

gem5’s modular design is built around the SimObject type. Most of the components in the simulated system are SimObjects: CPUs, caches, memory controllers, buses, etc. gem5 exports all of these objects from their C++ implementation to python. Thus, from the python configuration script you can create any SimObject, set its parameters, and specify the interactions between SimObjects.

Let’s start by creating a new config file and opening it:

This is just a normal python file that will be executed by the embedded python in the gem5 executable. Therefore, you can use any features and libraries available in python.

The first thing we’ll do in this file is import the m5 library and all SimObjects that we’ve compiled.

Next, we’ll create the first SimObject: the system that we are going to simulate. The System object will be the parent of all the other objects in our simulated system. The System object contains a lot of functional (not timing-level) information, like the physical memory ranges, the root clock domain, the root voltage domain, the kernel (in full-system simulation), etc. To create the system SimObject, we simply instantiate it like a normal python class:

Now that we have a reference to the system we are going to simulate, let’s set the clock on the system. We first have to create a clock domain. Then we can set the clock frequency on that domain. Setting parameters on a SimObject is exactly the same as setting members of an object in python, so we can simply set the clock to 1 GHz, for instance. Finally, we have to specify a voltage domain for this clock domain. Since we don’t care about system power right now, we’ll just use the default options for the voltage domain.

Once we have a system, let’s set up how the memory will be simulated. We are going to use timing mode for the memory simulation. You will almost always use timing mode for the memory simulation, except in special cases like fast-forwarding and restoring from a checkpoint. We will also set up a single memory range of size 512 MB, a very small system. Note that in the python configuration scripts, whenever a size is required you can specify that size in common vernacular and units like '512MB'. Similarly, with time you can use time units (e.g., '5ns'). These will automatically be converted to a common representation, respectively.

Now, we can create a CPU. We’ll start with the most simple timing-based CPU in gem5, TimingSimpleCPU. This CPU model executes each instruction in a single clock cycle to execute, except memory requests, which flow through the memory system. To create the CPU you can simply just instantiate the object:

Next, we’re going to create the system-wide memory bus:

Now that we have a memory bus, let’s connect the cache ports on the CPU to it. In this case, since the system we want to simulate doesn’t have any caches, we will connect the I-cache and D-cache ports directly to the membus. In this example system, we have no caches.

An aside on gem5 ports

Connecting ports together is easy to do from the python configuration files. You can simply set the request port = to the response port and they will be connected. For instance:

Another notable kind of magic of the = of two ports in a gem5 Python configuration is that, it is allowed to have one port on one side, and an array of ports on the other side. For example:

We will discuss ports and MemObject in more detail in the MemObject chapter.

Connecting the PIO and interrupt ports to the memory bus is an x86-specific requirement. Other ISAs (e.g., ARM) do not require these 3 extra lines.

Next, we need to create a memory controller and connect it to the membus. For this system, we’ll use a simple DDR3 controller and it will be responsible for the entire memory range of our system.

After those final connections, we’ve finished instantiating our simulated system! Our system should look like the figure below. 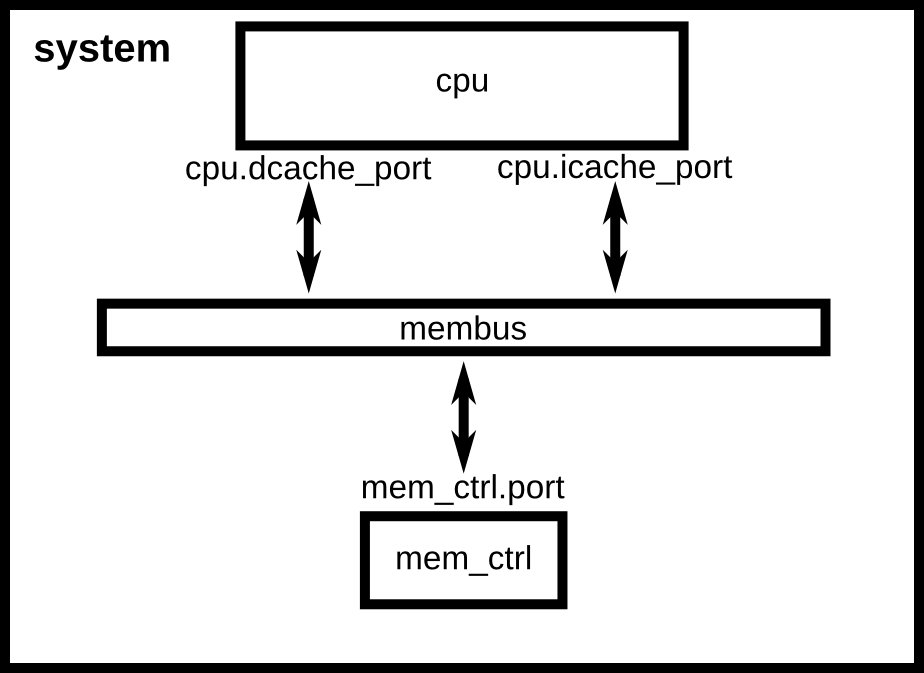 Next, we need to set up the process we want the CPU to execute. Since we are executing in syscall emulation mode (SE mode), we will just point the CPU at the compiled executable. We’ll execute a simple “Hello world” program. There’s already one that is compiled that ships with gem5, so we’ll use that. You can specify any application built for x86 and that’s been statically compiled.

If you do not need to model the operating system for your research questions, and you want extra performance, you should use SE mode. However, if you need high fidelity modeling of the system, or OS interaction like page table walks are important, then you should use FS mode.

The final thing we need to do is instantiate the system and begin execution. First, we create the Root object. Then we instantiate the simulation. The instantiation process goes through all of the SimObjects we’ve created in python and creates the C++ equivalents.

As a note, you don’t have to instantiate the python class then specify the parameters explicitly as member variables. You can also pass the parameters as named arguments, like the Root object below.

Finally, we can kick off the actual simulation! As a side now, gem5 is now using Python 3-style print functions, so print is no longer a statement and must be called as a function.

And once simulation finishes, we can inspect the state of the system.

Now that we’ve created a simple simulation script (the full version of which can be found in the gem5 code base at configs/learning_gem5/part1/simple.py ) we’re ready to run gem5. gem5 can take many parameters, but requires just one positional argument, the simulation script. So, we can simply run gem5 from the root gem5 directory as:

The output should be:

Parameters in the configuration file can be changed and the results should be different. For instance, if you double the system clock, the simulation should finish faster. Or, if you change the DDR controller to DDR4, the performance should be better.

Additionally, you can change the CPU model to MinorCPU to model an in-order CPU, or DerivO3CPU to model an out-of-order CPU. However, note that DerivO3CPU currently does not work with simple.py, because DerivO3CPU requires a system with separate instruction and data caches (DerivO3CPU does work with the configuration in the next section).

Next, we will add caches to our configuration file to model a more complex system.