The document describes memory subsystem in gem5 with focus on program flow during CPU’s simple memory transactions (read or write).

Model that is used in this document consists of two out-of-order (O3) ARM v7 CPUs with corresponding L1 data caches and Simple Memory. It is created by running gem5 with the following parameters:

Gem5 uses Simulation Objects derived objects as basic blocks for building memory system. They are connected via ports with established master/slave hierarchy. Data flow is initiated on master port while the response messages and snoop queries appear on the slave port. 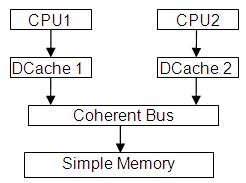 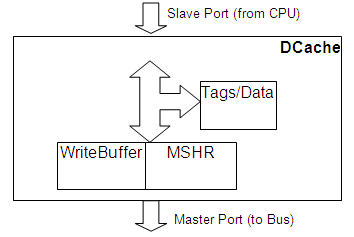 It is not in the scope of this document to describe O3 CPU model in details, so here are only a few relevant notes about the model:

Read access is initiated by sending message to the port towards DCache object. If DCache rejects the message (for being blocked or busy) CPU will flush the pipeline and the access will be re-attempted later on. The access is completed upon receiving reply message (ReadRep) from DCache.

Write access is initiated by storing the request into store buffer whose context is emptied and sent to DCache on every tick. DCache may also reject the request. Write access is completed when write reply (WriteRep) message is received from DCache.

Load & store buffers (for read and write access) don’t impose any restriction on the number of active memory accesses. Therefore, the maximum number of outstanding CPU’s memory access requests is not limited by CPU Simulation Object but by underlying memory system model.

The message that is sent by CPU contains memory type (Normal, Device, Strongly Ordered and cachebility) of the accessed region. However, this is not being used by the rest of the model that takes more simplified approach towards memory types.

Cached memory reads that match particular cache tag (with Valid & Read flags) will be completed (by sending ReadResp to CPU) after a configurable time. Otherwise, the request is forwarded to Miss Status and Handling Register (MSHR) block.

CPU’s access to Data Cache is blocked if any of the following is true:

Data Cache in block state will reject any request from slave port (from CPU) regardless of whether it would result in cache hit or miss. Note that incoming messages on master port (response messages and snoop requests) are never rejected.

Cache lines (referred as blocks in source code) are organised into sets with configurable associativity and size. They have the following status flags:

Each memory request is assigned to corresponding MSHR object (READ or WRITE on diagram above) that represents particular block (cache line) of memory that has to be read or written in order to complete the command(s). As shown on gigure above, cached read/writes against the same cache line have a common MSHR object and will be completed with a single memory access.

The size of the block (and therefore the size of read/write access to lower memory) is:

An unique order number is assigned to each CPU read/write request(as they appear on slave port). Order numbers of MSHR objects are copied from the first assigned read/write.

Memory read/writes from each of these two queues are executed in order (according to the assigned order number). When both queues are not empty the model will execute memory read from MSHR block unless WriteBuffer is full. It will, however, always preserve the order of read/writes on the same (or overlapping) memory cache line (block). 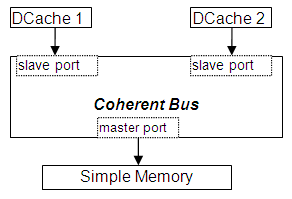 All requests on the slave port are forwarded to the appropriate master port. Requests for cached memory regions are also forwarded to other slave ports (as snoop requests).

Master port replies are forwarded to the appropriate slave port.

Master port snoop requests are forwarded to all slave ports.

Slave port snoop replies are forwarded to the port that was the source of the request. (Note that the source of snoop request can be either slave or master port.)

The bus declares itself blocked for a configurable period of time after any of the following events:

The bus in blocked state rejects the following incoming messages:

Memory read/write takes immediate effect. (Read or write is performed when the request is received).

Reply message is sent after a configurable period of time .

Note that bus object never gets response from both DCache2 and Memory object. It sends the very same ReadReq package (message) object to memory and data cache. When Data Cache wants to reply on snoop request it marks the message with MEM_INHIBIT flag that tells Memory object not to process the message.