The following picture, taken from the GEMS tutorial in ISCA 2005, shows a high-level view of the main components in Ruby.

SLICC stands for Specification Language for Implementing Cache Coherence. It is a domain specific language that is used for specifying cache coherence protocols. In essence, a cache coherence protocol behaves like a state machine. SLICC is used for specifying the behavior of the state machine. Since the aim is to model the hardware as close as possible, SLICC imposes constraints on the state machines that can be specified. For example, SLICC can impose restrictions on the number of transitions that can take place in a single cycle. Apart from protocol specification, SLICC also combines together some of the components in the memory model. As can be seen in the following picture, the state machine takes its input from the input ports of the inter-connection network and queues the output at the output ports of the network, thus tying together the cache / memory controllers with the inter-connection network itself.

Commonly used notations and data structures in the protocols have been described in detail here.

In general cache coherence protocol independent components comprises of the Sequencer, Cache Memory structure, Cache Replacement policies and the Memory controller. The Sequencer class is responsible for feeding the memory subsystem (including the caches and the off-chip memory) with load/store/atomic memory requests from the processor. Every memory request when completed by the memory subsystem also send back the response to the processor via the Sequencer. There is one Sequencer for each hardware thread (or core) simulated in the system. The Cache Memory models a set-associative cache structure with parameterizable size, associativity, replacement policy. L1, L2, L3 caches (if exists)in the system are instances of Cache Memory. The Cache Replacement policies are kept modular from the Cache Memory, so that different instances of Cache Memory can use different replacement policies of their choice. Currently two replacement polices – LRU and Pseudo-LRU – are distributed with the release. Memory Controller is responsible for simulating and servicing any request that misses on all the on-chip caches of the simulated system. Memory Controller currently simple, but models DRAM ban contention, DRAM refresh faithfully. It also models close-page policy for DRAM buffer.

The interconnection network connects the various components of the memory hierarchy (cache, memory, dma controllers) together. 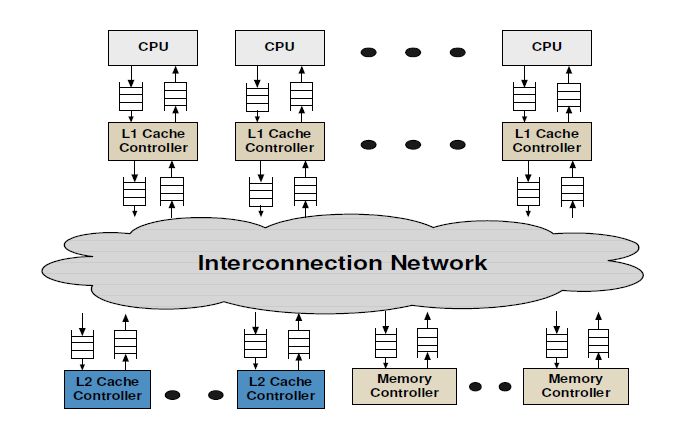 The key components of an interconnection network are:

More details about the network model implementation are described here.

Life of a memory request in Ruby

In this section we will provide a high level overview of how a memory request is serviced by Ruby as a whole and what components in Ruby it goes through. For detailed operations within each components though, refer to previous sections describing each component in isolation.